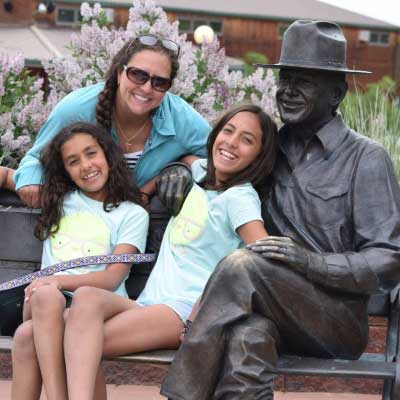 When a routine breast exam led to a cancer diagnosis, Whitney Nallathamby feared the worst.  Even though screening had detected the disease early, that didn’t lessen the Denver mom’s fear and questions of “what if?”  For many nights, she would sneak into her little girls’ rooms, sit on the edge of their beds, and make quiet promises to them in the dark.

“My kids are young, and they need their mom,” says Whitney, taking time out of an active summer schedule with her now 8- and 11-year-old daughters to recall her cancer journey that began three years ago. “I’d just cry and think: I will do everything I can, I will do whatever I have to, to continue being your mom.”

So when her Sky Ridge Medical Center providers suggested genetic counseling, the former research analyst jumped at the chance. “I like to do my research and make sure I’ve learned everything possible before I make my decisions. For me, doing the genetic counseling was never really a question,” says Whitney, now 48, whose Facebook page overflows with photos of her smiling daughters, family shots taken during ski trips and at soccer games, and call-outs for school-related volunteer projects she helps steer.

Today, Whitney has undergone a bilateral mastectomy and a total hysterectomy. Guided by her doctors and counselors, she launched a family-history search, learning two cousins had breast cancer at young ages and that her father was of Ashkenazi Jewish descent, high-risk factors for genetic mutations. The knowledge cemented her decision to undergo genetic testing.

“The first test came back exactly like my cousin’s. We had the same exact mutation,” Whitney says, adding that geneticists did not classify the mutation at that point as either a BRCA 1 or BRCA 2 mutation. Inherited anomalies in those two normally tumor-suppressing genes would have raised her risk of a second breast cancer and of ovarian cancer considerably.

“My cousin did a lumpectomy with radiation, but I’m not a risk-taker. It was for peace of mind,” Whitney says of her bilateral-mastectomy decision, which she followed with reconstructive breast surgery. “I really didn’t want to come back and have to go through dealing with cancer emotionally, physically and financially again.”

Dr. Joyce Moore, Whitney’s surgeon, says more women today, especially with legal protections against discrimination now in place, are having genetic testing done for similar reasons. “Patients really want to know more. They are making choices based on: I want to take care of myself. I want to be around, and I don’t want to have to go through something later,” says Dr. Moore, co-director of the Sky Ridge Breast Center. “No one wants to go through it the first time, but who wants to go through it again?”

While Whitney’s mastectomy was a viable medical option, reducing her chance of a second breast cancer by as much as 90 percent, Dr. Moore emphasized that the choice is not for everyone. “I have BRCA patients who have said, ‘I don’t want to remove the tissue,’ so we screen them more closely.”

Moreover, no two cases are exactly the same, Dr. Moore says. But having the information can help her guide her patients’ treatment and help them make decisions.

“Knowledge is power. It gives you choices.”

Whitney’s case also illustrates the importance of professional genetic counseling and follow-up, says Brittney Goetsch, Whitney’s certified genetic counselor with Sky Ridge’s partnering Rocky Mountain Cancer Centers. “Her original test was somewhat inconclusive,” Goetsch says. “We saw an alteration in BRCA 2, but it wasn’t clear at that time whether or not that alternation was really problematic.”

Continued lab analysis, and Whitney’s following up each year, eventually resulted in a confirmed BRCA 2 mutation, increasing her risk of ovarian cancer. “I’d already decided if my test ever came back positive, I would have my ovaries removed,” Whitney says.

Because she had a uterine fibroid issue as well, Whitney opted for a total hysterectomy, which she was able to have laparoscopically with Dr. Jeffrey James, a Sky Ridge gynecological cancer specialist and expert in robotic surgery. “My recovery was shorter than it would have been with the open-surgery option.”

Unless a woman still has childbirth plans, removal of the ovaries is recommended, Dr. James says. Unlike breast cancer, ovarian cancer doesn’t have as effective screening options, making it harder to detect, and it doesn’t have as good a prognosis if it’s caught later,” he says. However, if a young BRCA-positive woman wants babies, more targeted screening can take place until she’s ready for removal. “The risk for ovarian cancer doesn’t start to increase until about age 40.”

Whitney says her support system, beginning with Dr. Moore, gave her courage along the way. “Within the first minute I walked into her office, she just calmed me so much,” Whitney says. “Hearing the words you have cancer just swallows you up. Dr. Moore was kind and settling and reassuring.”

Whitney calls Sky Ridge Breast Cancer Navigator Christina Mullen her “angel.” From insurance help, to information seeking, to appointment scheduling, she had answers for everything, Whitney says. “It’s so helpful having someone like her when going through this. You are so emotionally caught up.”

Her husband, and desire to model courage for her daughters, also kept her going, she says. “He was always there for me. He always supported my choices. I’m one of the lucky ones. And I want my girls to be strong, proactive people in life.” Both daughters have a 50-percent chance of inheriting their mom’s mutation and will have to make their own choices when they are older, Whitney says.

She has also found sharing her genetic information with her extended family and her experience with other breast cancer patients rewarding. Whitney says that she realizes her chances of another cancer are not zero, and that all cancer survivors live with some fear, but she finds comfort in knowing that she had done all that she can do for prevention. “I have no regrets.”