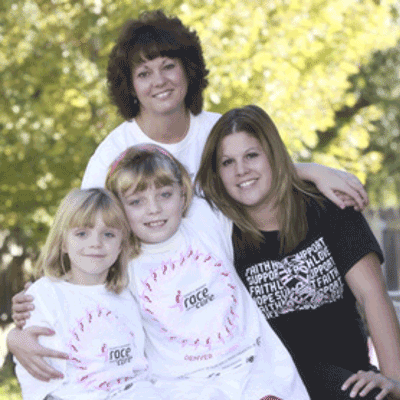 Little Abby Hornick runs out the back door, tears streaming down her cheeks, as she looks and finds what she needs most: her mom. Penny Hornick’s attention immediately turns toward her 5-year-old, who brushes back her blond locks through sobs, showing her mother where her sister’s foot accidentally hit her face during a bit of cartwheel play. Her mom scoops her up in a bear-like hug, and, like magic, everything is OK.

As a comforted Abby trots back inside in search of her sisters, Avery, 8, and Alissa, 22, Penny turns to a visitor on the back deck of her Littleton home and says that moments like those are the reason she’s still here today.

"I cried for at least 30 minutes solid. The first thing I thought about was my kids."

Penny, an EKG technician with Sky Ridge Medical Center, found a lump in her breast during a self-exam. A mammogram and biopsy ensued, through which the 47-year-old tried to remain positive. "Of course, when my OB called and said we have the results of the biopsy back, and you need to get over here right away, I just slid down the wall and lost it," she says.

Now, she hopes her experience can serve as a lesson to other women that self-exams, followed by determination, support and good medical care, can lead to happy success stories.

Her husband, Greg, the Director of Intensive Care Unit at Sky Ridge, was quickly by Penny’s side in the doctors’ office, her girls in the waiting room, as she heard her cancer diagnosis. "I cried for at least 30 minutes solid. The first thing I thought about was my kids." From the very beginning, her doctor was supportive, her husband like a rock, despite the emotional trauma it was for him, Penny says.

For Penny, the initial emotions—anger, fear, sadness—were overwhelming, especially when she thought of her girls. "Just knowing that I could leave this world without them, and knowing that I might not be able to see them grow up." But soon, she turned that fear into fierce determination.

A Survivor from the Beginning

"One time, Abby stopped mid-way up the stairs and said: ‘Mommy, are you going to go to heaven like Nana and Papa?’ And I said: No, I’m not going to heaven. I’m a survivor. I’m going to be here."

"Everybody kept saying: 'You’re going to be OK, Penny.'"

Penny says good medical care made the difference in her successful journey. Sky Ridge surgeon Dr. Joyce Moore was called the first day. "She was so heartfelt, and so genuine. She really listened to me," she notes, adding that all health-care providers involved in her care were supportive. "Everybody kept saying: 'You’re going to be OK, Penny. You are strong, and you are going to get through this.'"

When Hornick was told there would be a 48-percent chance of the cancer’s return with a lumpectomy, a double mastectomy was the only answer, she says. That’s when her husband told her about Sky Ridge plastic surgeons Dr. Chris Williams and Dr. Jeremy Williams, professional partners, but not relatives. The two are trained in a special reconstructive option that, because they work as a team, can be provided to patients for bilateral surgeries.

"It lowers the complication rate when you have two similarly-trained surgeons doing it together," says Dr. Jeremy Williams. Because the two also work as a team with other Sky Ridge surgeons, Penny awoke from her first surgery with Moore’s mastectomy and the Williams’ initial phase of reconstruction done.

The reconstructive surgery, called DIEP, uses a patient’s own tissue and muscle-sparing techniques, so that core strength is less compromised than with other surgeries. That means she can have an easier time lifting her girls for hugs and doing her regular workouts.

The plastic surgeons were able to take enough tissue from Penny’s abdomen for the first phase (a tummy-tuck bonus, the petite brunette says with a grin), and will take the rest of the needed tissue from her buttocks. She chose the DIEP option because she wanted her reconstructed breasts to be from her own body, she says. "I didn’t want implants. I didn’t want a foreign substance in my body."

The Importance of Support

Penny says she’s "ecstatic" about the Williams’s work, and grateful for them and everyone else who helped her through, advising women who find themselves going through her experience to rely on every bit of support they can find. "Don’t try to do it alone."

"I conquered this, and I am strong."

All family and friend relationships became stronger, especially with her relatively estranged younger sister, who came from out of state to take care of her during and after surgery. "It brought us back together," Penny says. Her sister and "amazing" husband took good care of her and her girls, aided by her Sky Ridge colleagues, who provide meals for a month.

Penny reiterates the importance of self-exams and regular mammograms. "I had my mammogram less than a year before. If I hadn’t have done my self-exam, who knows where I’d be today?"

She says she’s blessed to have such care, and is ready to put the journey behind her and focus on what’s most important: her family. In early October (2010), her husband and girls joined her in the Denver Race for the Cure. "That was very cleansing. I cried the whole time. When we passed under the finish line, it was just amazing. I said: I conquered this, and I am strong."