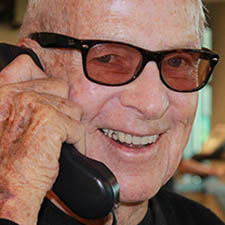 John Hickey turned 89 on October 24. He's originally from upstate New York, his wife’s name is Mary; they have seven children together and John has been an auto dealer for more than 60 years. But those are just the stats...John is effervescent (enthusiastic, expansive, resilient…).

Saying he has a twinkle in his eye isn’t quite enough. When asked about his 10-year relationship with Sky Ridge, he tilted his head, gave a dry, low chuckle and said, "I’ve known so many people here. I’ve made so many friends. It’s a second home to me. " John has spent the past 10 years in Sky Ridge’s Cardiac Rehab Program. His dynamic presence is not only anticipated by the staff (he is pictured here talking to one of our nurses on the phone who couldn’t be at work on his birthday, but called to make sure she could wish him a happy one), but boosts the morale of all his co-patients. He saunters over to the treadmills to jokingly tell his friend that he’s walking too slow, and then briskly walks to the bikes to remind his other compatriot not to "bike through the park without him… " because they imagine they’re in the park together to make their allotted cardio go faster.

For 10 years, three days a week, John has come to the Sky Ridge Cardiac Rehab Center to bike, use the elliptical, walk the treadmill, check his vitals with the staff and participate in heart care education classes. John said, "Thanks to the phenomenal Cardiac Rehab Team, when I visit Dr. Molk, my cardiologist, he tells me, ‘John, I don’t know what you’re going to die from, but it won’t be your heart.’ "

Beside the rave reviews from his cardiologist,

John says he keeps coming back to Sky Ridge "not only because it’s convenient and close to home but because of the effective program and the people. I can’t say enough about this hospital – terrific. "