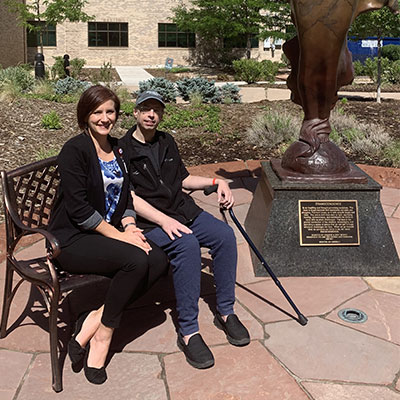 When a piercing abdominal pain doubled over James Johnson in November 2018, the 50-year-old Centennial resident headed to the emergency department at Sky Ridge Medical Center. There, tests showed that an intestinal tear was allowing bodily waste to seep into his bloodstream. As a result, Johnson had developed sepsis, a condition that occurs when infection overwhelms the body's immune system. Sepsis is the third leading cause of death in the U.S., which makes fast diagnosis and treatment critical.

When Johnson woke from emergency surgery he learned the underlying cause of his problems: stage 3 colorectal cancer. Colorectal Surgeon Dr. Kenneth Blake had removed about a foot of the cancerous colon along with affected lymph nodes. Before Johnson could start chemotherapy to rid his body of lingering cancer cells, a team led by Infectious Disease Specialist Dr. Sandhya Ayyar had to treat his septic condition. Johnson remained hospitalized for two weeks while he received high doses of intravenous (IV) antibiotics. Once discharged, he returned to Sky Ridge Infusion Services for daily antibiotic infusions until the infection was gone two months later.

During this time, Johnson was re-admitted to the hospital for treatment of a dangerous blood clot called deep vein thrombosis (DVT). People with cancer -- and people who are laid up in bed for a prolonged time -- have an increased risk of DVT. If the clot travels to the lungs, it can cause a potentially fatal pulmonary embolism. Even though Johnson began taking blood-thinning medications (called anticoagulants) to prevent this possibility, he was hospitalized once for a pulmonary embolism.

Soon after Johnson started chemotherapy under the care of Medical Oncologist Dr. Robert Jotte, he developed kidney stones. Hospitalized again, Urologist Dr. Nancy Huff performed a laser procedure to break up the stones. After Johnson concluded his first six chemotherapy treatments, he underwent a procedure to get rid of the ostomy bag that had been collecting waste since his first surgery. In July, Johnson resumed chemotherapy and finished in September. He continues to go to Infusion Services for antibiotics and fluid hydration as needed.

Johnson credits Nurse Navigator Angela Powers with helping him maneuver all of the medical tests, procedures and related bills. "She helps schedule appointments, ensures I know what's going on, manages communication among all of my doctors and knows exactly how to help when I encounter any problems," says Johnson, who asserts that all of his care at Sky Ridge has been top-notch. "I tell everyone to go to Sky Ridge for colon cancer screening and any other care that's needed," he says. "The medical teams are compassionate, professional and they go out of their way to make sure you understand, and are comfortable with, each step of your care plan."