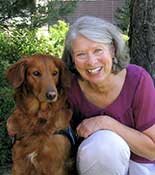 All of our handlers are volunteers and enjoy helping patients through their love of canines. The teams are evaluated and registered by Pet Partners, and due to its high quality, need to be re-evaluated every two years. Enjoy browsing through the pet profiles below to become more familiar with our K-9 Team! 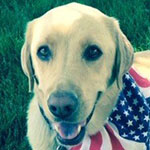 As a puppy, Auggie was big, rambunctious and quite defiant. So at 6 months he was sent for a stint in prison, really! When he returned to us four weeks later, he was happy, playfully sweet and had a calm demeanor; all because he finally learned what was expected of him. Now he is a joy to spend time with and we try to take him everywhere with us. He is so full of love! Love for people and his ball and treats. I also think he can read my mind with those big brown eyes!

Bearje is a 5 year old Bichon Frise/Shih Tzi mix, which is called a Shih Chon. He has been a therapy dog since January 2016 and works at various Assisted Living facilities as well as with Ronald McDonald house. Bearje also did a Christmas visit to Denver International Airport where he was featured on the news. Bearje walks about 3 miles every day and loves to go on hikes in the foothills and mountains. He has about a dozen good neighborhood dog friends—both large and small dogs but he hates coyotes!

Breck is a petite golden retriever who career changed from Guide Dogs for the Blind at 15 months of age due to being too “soft” for the program. She’s a natural schmoozer and has always been a therapy dog in her heart. She started working in the Ronald McDonald Room at Sky Ridge at 4 months old as part of her guide dog training so she grew up in the hospital. She believes her job is to make everyone smile and of course she wants everyone to pet her. She’s a perky, happy and affectionate girl who loves to run, play, fetch and carry toys when she’s off duty. She and Oscar are cousins and best buddies.

Brewgan started his pet therapy visits in 2017 at three and a half years old. He is 3/4 Saint Bernard and 1/4 collie. However, since he only weighs 135 pounds, he's considered a “teacup" Saint Bernard. Brewgan greets everyone with a nice sniff. At doggie daycare Brewgan is called "the puppy whisperer” as he takes on the role of nanny for the puppies being graduated to the adult yard. He loves car rides and literally stops traffic as people try to get a closer look at him. Brewgan enjoys weekend brunch or a puppuccino before hitting the dog park.

Golden Retriever Chloe began her career in pet therapy in Dec 2015. She has a sweet, gentle nature; her demeanor is cheerful and unassuming.  Chloe enjoys people of all ages, old and young alike; she has never met a stranger. Chloe loves to be petted and will seek it out.  She enjoys being talked to, and using her big brown eyes, she will “share a conversation” with you.  At home her favorite pastime is to romp with her brother, a Spaniel-mix.

Cody is a five-year-old Aussiedoodle who captures the hearts of all who meet him. He is full of energy, but knows when he walks through the doors at Sky Ridge that he has an important job to do. He particularly loves meeting with patients, family and staff in the waiting rooms, ICU and ER. They often mistake him for a little bear cub! Cody has a cousin, Willie, who also volunteers at Sky Ridge.

Misty, whose AKC registered name is "Sunny Ridge Under the Mistletoe," was born on Christmas day four years ago. She's the classic Golden Retriever that enjoys meeting people, receiving pets and looking lovingly into your eyes. In her spare time, Misty loves walks and car rides, watching for squirrels and bringing toys down from upstairs. Misty has also earned her Canine Good Citizens Certification.

Oscar is a golden-lab cross who career changed from Guide Dogs for the Blind at 15 months of age due to immature cataracts. As his puppy raiser, I was able to bring him back home to become my second therapy dog partner. Due to his service dog status, Oscar has been working since he was a tiny puppy. He is mellow, gentle and intuitive, a people magnet who has the ability to bring an air of calm wherever he goes. Napping is his specialty although now that he is a "normal" dog, he is learning to enjoy previously forbidden games such as fetch.

Snickers is a four-year-old black labradoodle and has been part of the program for two years. Snickers may appear calm and mellow, but he does get his bursts of energy when his favorite toys turn up. He will visit any area of the hospital and loves getting a glass of ice as a reward when visits are over.

Spencer is a black-and-white English Springer Spaniel following in the paw steps of his great-aunt, Jamie, who has been visiting at Sky Ridge since 2009. Jamie’s father and Spencer’s great-grandfather was Diamond Jim, who won the Westminster in 2007 and was a nationally recognized Alzheimer’s Association therapy dog. Spencer has worked very hard from the time he was a small puppy to learn good manners. He loves people and is always ready to give them a paw. Spencer is a sweet boy who is very affectionate and loves to play fetch, chew his bones, and play with Jamie. He loves to be pet and get hugs from anyone he visits. 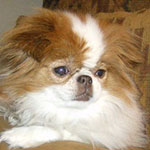 Susie is a 9 year old Japanese Chin who came into Rescue after her owner unexpectedly passed away in 2016. It took a while for her to find her “Forever Home” because of her severe, chronic dry eye and the daily eye drop regimen it requires. She is a very sweet and mild-mannered girl although she likes to keep her feline housemate in line. She especially likes to play with cat toys. She began her job at Sky Ridge in March of 2019 and can usually be found on the 3rd, 4th, 5th and 6th floors.

Willie is a six-year-old Aussiedoodle who has been part of the therapy program since October 2013. Willie is very friendly, has boundless energy and loves life. Patients remark about how mellow he is, but outside his Sky Ridge duties, he is anything but mellow. He loves chasing squirrels or his toys, but especially loves taunting his canine cousin Sadie. He enjoys camping, hiking and riding in the car.