Air moves through the airways into air sacs of the lungs called alveoli. The alveoli have several blood vessels that allow for gas exchange between the lungs and blood. Oxygen can pass from the lungs to the blood and carbon dioxide can pass from the blood to the lungs. Radiation pneumonitis causes inflammation in these alveoli. The inflammation can decrease the amount of oxygen that enters your body. If it remains untreated, pneumonitis can also lead to permanent tissue damage.

In most cases, radiation pneumonitis is caused by radiation therapy to the lungs.

Lung tissue is sensitive to irritants like radiation. Sometimes after exposure to high doses of radiation the tissue becomes inflamed. Inflamed tissue swells and produces extra fluid which blocks gas exchange between the lungs and the bloodstream. The body will have less oxygen available in the blood. In addition, carbon dioxide (a waste product) builds up in the blood because it is harder for the gas to pass from the blood to the lungs.

Over time, if left untreated, the inflammation gradually wears down the lung tissue and leads to scarring. This scarring is permanent and can lead to future lung or breathing complications. 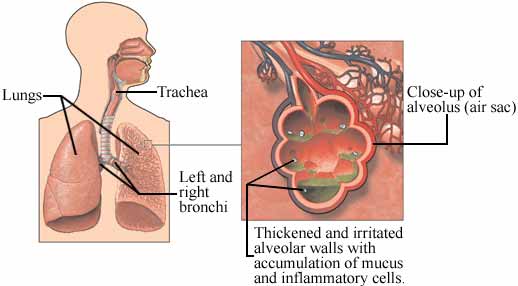 Radiation pneumonitis is most common in people who have radiation therapy for lung cancer.

Treatment factors that increase the risk of radiation pneumonitis:

Other factors that may increase the chances of radiation pneumonitis:

Some people with radiation pneumonitis do not have apparent symptoms. In those that have them, the most common is shortness of breath with activity or rest, which worsens with time.

Radiation pneumonitis may also cause:

The doctor will ask about any symptoms and medical history including recent treatment. A physical exam will be done including listening to the lungs. Symptoms of radiation pneumonitis are similar to many other lung disorders. It is generally diagnosed by eliminating other causes of your symptoms. Tests may include:

Imaging tests to view the lungs and/or surrounding structures:

When caught early the goal of treatment is to stop inflammation before it causes damage. The course of treatment depends on the severity of the radiation pneumonitis. Prompt treatment may lead to a full recovery in most people.

Radiation pneumonitis is treated with:

Other medication or medical treatment may be needed to ease symptoms until the pneumonitis can be resolved. Options include:

Some medication of chemotherapy drugs can make pneumonitis worse. Your current medications or treatment plan may need to be altered.

Lung function will also be regularly monitored to look for changes.

Radiation is carefully measured to deliver the least amount of radiation to the smallest area of tissue while being effective.

The earlier symptoms are recognized and treated, the better the outcomes. It is important to monitor any side effects from radiation therapy.