Tongue-tie is difficulty moving the tongue because of attachment of tissue too close to the tip of the tongue or tight tissue under the tongue. The limited movement can make it difficult to breastfeed. The degree of limitation can vary from infant to infant.

Tongue-tie is present at birth.

A tissue called the frenulum helps the development of the mouth before and shortly after birth. This frenulum is attached to the underside of the tongue. After birth the frenulum should start to shrink and loosen its hold on the tongue.

In some, the frenulum does not shrink as expected. The exact reason is not clear but it may be associated with genetics.

Tongue-tie is more common in boys. It may also be more likely if other family members have had it.

Symptoms will depend on the degree of limitation. Most children with tongue-tie will not have symptoms.

In those that have symptoms, tongue-tie may cause problems with latching onto the nipple during breastfeeding.

Muscles and Nerves of the Tongue 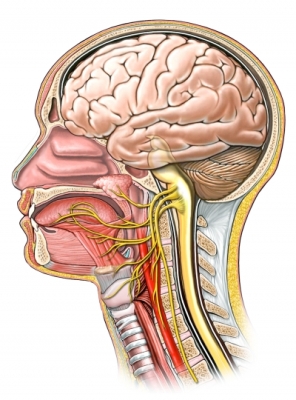 Tongue-tie can be diagnosed with a routine physical exam. There are also ways to estimate how severe it is.

Discuss your treatment preferences and options with your child’s doctor.

If there are no severe functional issues, your child’s doctor may recommend watchful waiting. Over time, the frenulum will loosen on its own.

The frenulum may be surgically corrected if there is very limited movement in the tongue associated difficulty breast feeding and gaining weight. Options include:

These surgeries can often be done in a doctor’s office.

There are no current guidelines to prevent tongue-tie because the cause is unknown.