Flat head syndrome is the flattening of an infant’s head due to continued pressure on one spot. These changes to the skull cause the head to look distorted, but are purely cosmetic and not associated with problems of brain function or growth.

There are 3 common types of flat head syndrome: 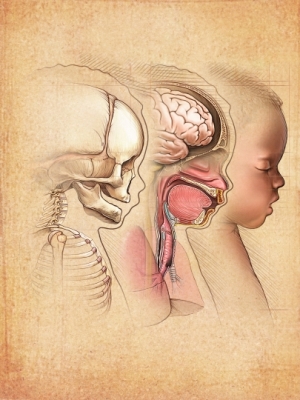 Infant’s skulls are softer than older children. A softer skull is a normal part of growth and development, but can make the skull more vulnerable in the first few months after birth. Pressure on a softer skull can cause a change in the shape of the head. The pressure is most often caused by long periods of time with the head resting in the same position. Since young infants have little control over head movement they are more likely to spend long periods of time in the position they are placed in.

Older infants are less vulnerable to these changes because their skulls become harder and they are better able to control their head movements.

Factors that may increase your baby’s chances of flat head syndrome include:

Babies with flat head syndrome have a flattened spot on one area of the head. Flattening on the back of the head may also result in distortions of the face on the opposite side.

The diagnosis can be made by physical appearance and physical exam.

Talk with your baby’s doctor about the best treatment plan for your baby. Options include:

Regularly changing your baby’s position will relieve pressure on the affected area of the skull. Some steps include:

Physical therapy may be used to teach you exercises you can do with your baby. The exercises will include stretching your baby’s neck muscles and decreasing the preference to rest on one side only.

If your baby’s condition is severe, a custom-molded helmet or band may be advised. The device will apply pressure on a baby’s skull to promote a more rounded head shape.

Your baby’s head shape will improve over time. Helmet therapy will only shorten the process.

To help reduce your baby’s chances of getting flat head syndrome: