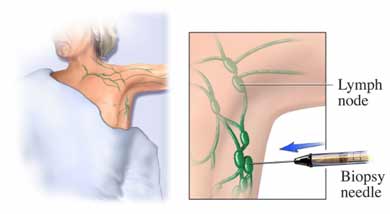 This biopsy is often done during cancer-removal surgery or prior to surgery. Sentinel node biopsy is part of the staging process. Staging is an attempt to determine how much the cancer has spread away from the original tumor. The cancerous tissue may have been biopsied already.

Complications are rare. But no procedure is completely free of risk. If you are planning to have this biopsy, your doctor will review a list of possible complications. These may include:

If the lymph nodes are removed, there is an increased risk of the following:

Some factors that may increase the risk of complications include:

Your doctor will do a physical exam. Tests may include the following:

Talk to your doctor about your medications. You may be asked to stop taking some medications up to one week before the procedure.

Prior to the procedure, you should also:

Depending on the location of the lymph node, you may be given one of the following:

Description of the Procedure

A blue dye, and often a radioactive tracer, will be injected into an area near the tumor. It may be done several hours before surgery. The dye and tracer will travel from the tumor area to the sentinel nodes. This will also help identify which nodes are the sentinel lymph nodes. A small incision will be made. The sentinel node(s) will be removed. The removed node will be checked for cancer cells. If cancer is found, the rest of the lymph nodes in that area will be removed.

If cancer is not seen in the sentinel node, it is unlikely that the cancer has spread to the other remaining lymph nodes. The other lymph nodes are not removed.

How Long Will It Take?

The biopsy takes about 30-60 minutes. Surgery to remove the entire cancer takes longer.

Anesthesia will prevent pain during surgery. Pain and discomfort after the procedure can be managed with medications.

The result of the sentinel lymph node biopsy determines if additional lymph nodes need to be removed. It can also help determine the severity of your cancer.

Contact your doctor if your recovery is not progressing as expected or you develop complications, such as:

If you think you have an emergency, call for emergency medical services right away.