A gastric ulcer is a sore in the lining of the stomach. 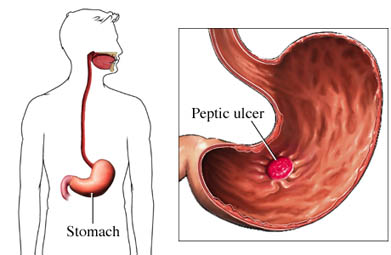 Upsets in the balance of stomach acid and juices can lead to an ulcer. This can be caused by:

Less common causes include any of the following:

Factors that increase your chances of gastric ulcer include:

Gastric ulcers do not always cause symptoms. Symptoms may come and go and can occur at any time. Having an empty stomach may make them worse. Symptoms may include:

Ulcers can worsen. This can lead to serious problems and severe belly pain such as bleeding. Bleeding symptoms may include:

An ulcer can break through the wall of the stomach. It is called a perforated ulcer. It causes sudden and severe pain.

Your doctor will ask about your symptoms and past health. A physical exam will be done.

An upper endoscopy will confirm an ulcer. Other tests may be done to look for a cause.

Treatment options may include one or more of the following:

Medicine may help to treat cause or ease symptoms. Choices include:

Changes in everyday habits may help. They may ease symptoms and help the ulcer heal. Helpful steps are:

Procedures may be needed for:

Surgery for gastric ulcers is rare. It may be done to remove the ulcer or stop bleeding. Tissue from somewhere else on the body may also be used to patch the ulcer.

Not all ulcers can be prevented. To help reduce the chances of H. pylori infection:

To help reduce the chances of a gastric ulcer from NSAIDs: