Rosacea is a skin disorder that causes chronic redness of the face. It can cause swelling, pimples, and visible blood vessels. Rosacea usually affects the cheeks, forehead, chin, and nose, but the ears, chest, and back may also be affected. More than half of people with rosacea also have mild eye symptoms, including redness, burning, and watering. There are 4 types. 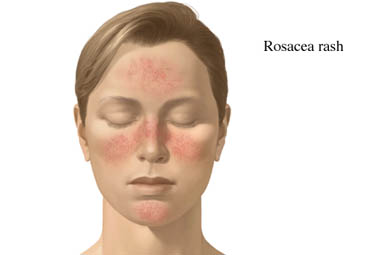 In some people, especially men, a condition called rhinophyma develops. In this condition, the nose becomes enlarged, bulbous, and red.

The cause of rosacea is unknown. A combination of genetic and environmental factors may be related to its development. Some researchers believe that rosacea is primarily a disorder of the blood vessels, or vascular system, in which something causes blood vessels to swell, resulting in flushing and redness.

A mite that lives in facial hair follicles may possibly be involved. Some researchers believe that these mites clog the sweat gland openings, leading to inflammation. There may also be a link between rosacea and Helicobacter pylori, a bacterium that causes infection in the gastrointestinal system. The immune system may also play a role in the development of rosacea in some people.

Approximately 16 million people in the United States have rosacea. It usually occurs in adults between the ages of 30 and 60. While rosacea cannot be cured, it can be treated and controlled.