A tumor can be benign or malignant. A benign tumor is not cancer and will not spread to other parts of the body. In the large intestine, most benign growths are called polyps. A malignant tumor is cancer. Cancer cells invade and damage tissue around them. They can also enter the lymph and blood streams, spreading to other parts of the body. Colorectal cancer is the development of malignant cells in the large intestine. 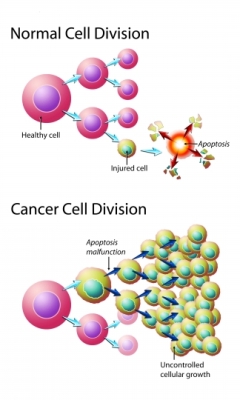 Normal Anatomy and the Development of Colorectal Cancer

Cell division and cell death are a normal process in the body to replace old or damaged cells. The inside of the large intestine may have a higher rate of cell turnover because of damage during normal digestive processes. The colon is also exposed to carcinogens (cancer-causing agents) from foods that are eaten or because of how bacteria in the gut react to the food. These changes may irritate the cells and increase turnover from old to new cells.

Polyps are small growths that can be found in the colon and rectum. There are several types of polyps. Though most are benign, some have the potential to develop into cancer. The highest risk of cancer development comes from adenomatous polyps.

Cancer can occur anywhere in the large intestine, but it is most commonly found in the last sections (sigmoid colon and rectum). Though it is fairly rare, cancer can also occur in the anal canal. Colorectal cancer may cause bleeding or interfere with normal function. If it grows beyond the colon or rectum, the cancer can penetrate nearby structures, such as the urinary tract, reproductive organs, or anus, and interfere with their function as well. It can also spread to lymph nodes or blood vessels, which can carry cancer cells to other areas of the body. The most common sites for colorectal cancer to spread to are lymph nodes in other parts of the body, the lungs, liver, or other organs in the abdominal and pelvic cavities.

The wall of the large intestine is made of 4 different layers. From the innermost to outermost layer, they are named mucosa, submucosa, muscle, and serosa. Almost all colorectal cancers are adenocarcinomas. That is, they start in the mucosa and spread outward through the serosa. Other types include: 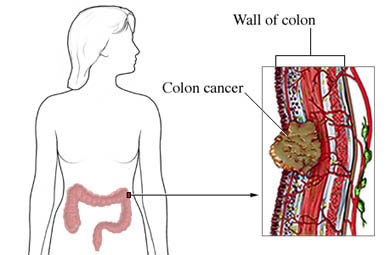 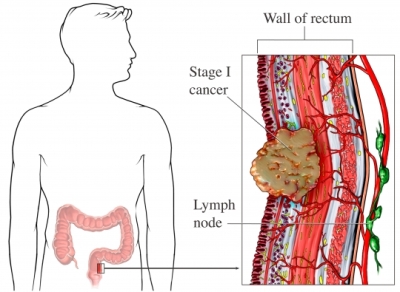