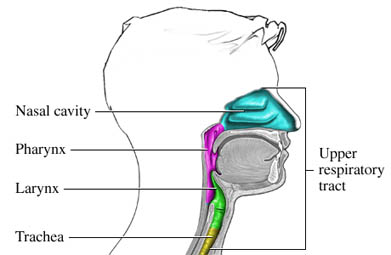 In the US, the broad category of viral respiratory illness is responsible for many school and work absenteeisms.

Influenza travels around the globe in yearly winter epidemics of varying magnitude. Major epidemics occur every 10-15 years and may kill upwards of 40,000 people or more in the US alone. Most of the deaths occur in the elderly and those weakened by chronic illnesses, such as heart and respiratory diseases.

The common cold is characterized by nasal congestion, a runny nose, sneezing, and perhaps a sore throat, headache, and malaise (general feeling of illness). A fever is unusual. Symptoms resolve on their own usually within 1-2 weeks.

There are at least 200 known rhinoviruses responsible for the symptoms of a common cold. Some of these may also affect the lower respiratory tract and cause other conditions. Other viruses, such as respiratory syncytial virus can cause severe pneumonia in infants.

Influenza is a very specific illness caused by influenza viruses. It has a characteristic seasonal cycle that peaks in the winter. It also has typical symptoms, although they vary greatly in severity among cases. It may feel similar to a common cold, but it usually causes a high fever (102°F-104°F), significant malaise, and a dry cough along with a runny nose, headache, muscle ache, and sore throat.

Influenza viruses are divided into three groups: A, B, and C. Influenza A is the cause of the worst epidemics. This is because it changes its identity often, so that a person’s previously developed immunity may not recognize the new variation.

International organizations like the World Health Organization (WHO) Epidemic and Pandemic Alert and Response (CSR) team are constantly searching the world for new variations of influenza viruses. Each year they attempt to identify the strains most likely to cause epidemics and make recommendations for developing vaccines against them.