Here are the basics about each of the medicines below. Only common problems with them are listed.

These drugs can be used to treat sudden symptoms or for long-term control. 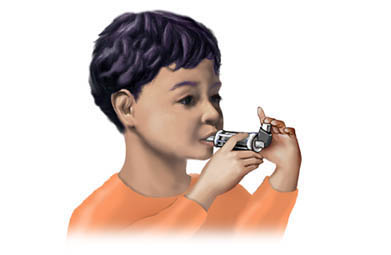 These drugs help to open the airways. This can provide quick relief. They can also be used before exercise.

Ipratropium opens the airways and may ease mucus. Tiotropium has also been used. They are inhaled to ease coughing, wheezing, and problems breathing. They are not often used in children.

Ipratropium is often used with other bronchodilators to treat sudden, severe attacks.

These drugs help ease inflammation and prevent symptoms from getting worse. They can cause side effects when taken orally instead of being inhaled. Long term use is not advised.

These drugs are used to control symptoms and ease inflammation.

These drugs reduce, control, and reverse inflammation. They may reduce the need to use oral corticosteroids and rescue medicine as often.

These drugs may be used to prevent symptoms over the long term. They ease inflammation and can also be used before exercise.

Some people may have problems with cough when using these.

These drugs may be used to prevent symptoms over the long term. They are helpful at night and are often added to anti-inflammatory therapy, such as inhaled corticosteroids. They can also be used before exercise or exposure to an allergen. They should not be used during a sudden attack.

Long-acting inhalers, like salmeterol, may raise the risk of asthma-related death, intubation (putting a tube in the windpipe to breathe), and hospitalization. This often happens when they are taken in error and used as rescue inhalers. These drugs are almost always given with an inhaled corticosteroid.

These drugs may be used to prevent symptoms over the long term. They are helpful at night. It works by opening the airways and relaxing the muscles around the bronchial tubes. It also makes it easier to clear mucus out of the airway.

Leukotriene modifiers ease inflammation by preventing the action of leukotrienes, which sustain inflammation. These types of medications are not used to ease sudden symptoms. They can be used to prevent symptoms from happening.

Leukotriene blockers ease inflammation by stopping the production of leukotrienes. They are used for long-term control and prevention in mild asthma.

Omalizumab is a common name for this drug.

An injection of this drug binds to an antibody that leads to allergic symptoms. It provides long-term control and prevention of symptoms in mild asthma.

Some problems may be:

Some drugs are combined to make them easier to take and prevent people from using the wrong inhaler.

These drugs provide long-term control and prevention of symptoms by combining a long-acting beta-2-agonist and an inhaled steroid.

The side effects are the same as the ones listed for the individual drugs.