Breast cancer is a disease in which cancer cells grow in the breast tissue. It is the most common cancer in women in the US. The breast is made up of lobules, which make milk and ducts that allow milk to pass to the nipple. The lobules are surrounded by fat, connective tissue, blood vessels, and lymphatic tissue.

Types of breast cancer include: 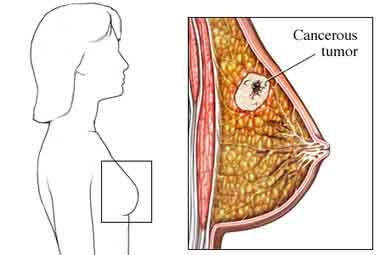 Cancer occurs when cells in the body divide without control or order. Normally, cells divide in a regulated manner. If cells keep dividing uncontrollably when new cells are not needed, a mass of tissue forms, called a growth or tumor. The term cancer refers to malignant growths. These growths can invade nearby tissues. Cancer that has invaded nearby tissues can then spread to other parts of the body.

It is not clear exactly what causes these problems in the cells, but is probably a combination of genetics and environment.

Factors that may increase your chances of breast cancer:

Some may have no symptoms at all while other may have:

Note: These symptoms may also be caused by other, less serious health conditions. See a doctor about any symptoms that may be worrisome.

Breast cancer may be found during a mammogram screening. Screening recommendations for women include:

Breast changes may also be found during a regular medical visit. The doctor will ask about your symptoms and medical history. A physical exam, breast exam, and blood tests will be done.

Your doctor will test the suspicious breast tissue and nearby lymph nodes. A sample of the tissue will be removed and sent to a lab to look for cancer cells. This can be done with different types of biopsies such as:

If cancer is present, your doctor may order tests to learn about the type of cancer. These may include:

A combination of your test results will help to determine the stage of cancer you have. Staging is used to guide your treatment plan. Like other cancers, breast cancer is staged from 0-4:

Cancer treatment varies depending on a number of factors including the stage and type of cancer. The plan may include one or more types of treatment to attack any current cancer and reduce the risk of spread or recurrence.

The goal of surgery is to remove as much of the cancer as possible. The surgery may also be used to remove tissue for detailed testing. The type of surgery will depend on the stage and type of cancer and overall treatment plan. Options include:

Chemotherapy is the use of drugs to kill cancer cells. It may be given in many forms including pill, injection, or through an IV. The drugs enter the bloodstream and travel through the body killing mostly cancer cells. Some healthy cells are killed as well causing a variety of symptoms.

The following therapies may be to used as overall part of care:

Cancer treatments can cause some side effects like nausea, anemia, pain, or bone loss. Other medications or treatments may be needed to minimize these problems throughout your cancer treatment.

Options that may be available for those with a high risk of breast cancer include: