Galactorrhea is a discharge of milk-like substance from the breast that is not associated with breastfeeding. This condition mainly occurs in women. It does occur in men and may even occur in infants, but much less commonly. The milky white discharge can come from 1 or both breasts, and the breast may leak fluid with or without stimulation. 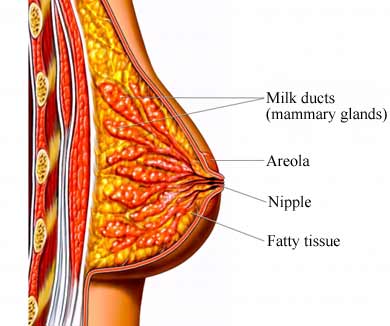 Galactorrhea has many causes, though sometimes the cause is unknown. Excess prolactin, a hormone that stimulates milk production, is often the cause of galactorrhea. Tumors of the pituitary gland, called pituitary adenomas or prolactinomas, can cause excess prolactin production. The pituitary is a small gland attached to the brain. Pituitary tumors are usually not cancerous.

Other causes of galactorrhea include:

Galactorrhea is more common in women. Other factors that may increase your chance of galactorrhea include:

The primary symptom is a milky discharge from the nipple that is not associated with breast-feeding. The discharge can come from 1 or both breasts. Other symptoms that can occur along with the discharge include:

You will be asked about your symptoms and medical history. A physical exam will be done. Tests may include:

If the discharge is not milky or contains blood, then this is not galactorrhea. Other tests must be done to check for breast cancer or other disorders.

Treatment depends on the cause. In some cases, no medical treatment is necessary, and the condition will go away on its own. In these cases, breast binders that prevent stimulation of the nipples may be effective. If medications are identified as the potential cause, safe alternatives should be sought.

If an underlying cause for galactorrhea, such as a pituitary tumor, is found, this condition may be treated.

To reduce your chance of galactorrhea: