The liver is located in the right side of the abdomen. It stores and metabolizes nutrients. It also filters and stores blood. Liver cancer is the growth of cancer cells in the liver. 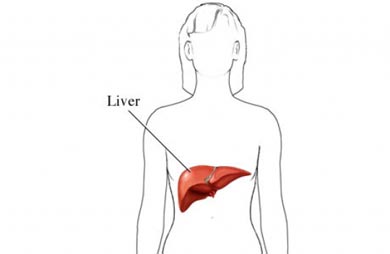 Cancer occurs when cells in the body divide without control or order. Normally, cells divide in a regulated manner. If cells keep dividing uncontrollably when new cells are not needed, a mass of tissue forms, called a growth or tumor. The term cancer refers to malignant growths. These growths can invade nearby tissues. Cancer that has invaded nearby tissues can then spread to other parts of the body.

It is not clear exactly what causes these problems in the cells, but it is probably a combination of genetics and environment.

Liver cancer is more common in men, and in people over 40 years old. Other factors that may increase your chances of liver cancer:

Symptoms of liver cancer in the early stages are vague. They often go unnoticed.

Liver cancer can cause the following symptoms:

Your doctor will ask about your symptoms and medical history. A physical exam will be done.

Your bodily fluids may be tested. This can be done with:

Imaging tests evaluate the liver and other structures. These may include:

The physical exam combined with all of your test results, will help to determine the stage of cancer you have. Staging is used to guide your treatment plan. Like other cancers, liver cancer is staged from I-IV. Stage I is a very localized cancer, while stage IV indicates a spread to other parts of the body.

To help reduce your chances of liver cancer: