Surrogacy - A Different Path to Parenthood

As with most moms, tears slid down Marian Dam’s face when her baby was born. Slightly shaken with the intensity of it all, she cut the umbilical cord that had sustained little Lillian for months, and took her daughter into her arms. Three minutes later, baby Olivia joined her twin sister, and this time, Dad did the honors. But that’s where any similarities end.

The day-old twins of Marian Dam and Greg Goodwin sleep
through their first major photo shoot at Sky Ridge.

In this case, the parents stood side-by-side, Mom wearing street clothes, not a hospital gown. When dad Greg Goodwin cut the cord of his second-arriving twin, it was connected to a surrogate mom, a woman who, a year before, had been a stranger. She looked quietly on as the two tearfully accepted her gift to them.

“It was just an overwhelming experience,” Goodwin says. “Those first few minutes when you are holding your children that you have wanted for so long and worked so hard to get.” Having met too late in life to have a baby naturally, the two did some soul-searching and eventually decided surrogacy was the right choice.

Although the number of surrogate births is still relatively few, a surge of celebrities taking this route – Nicole Kidman, Elton John, Sarah Jessica Parker – has raised interest in the option, which accounts for about 1 percent of the assisted reproductive technology procedures done in the United States each year. And one of the more-recognized doctors in the field practices at Sky Ridge Medical Center, where Dam and Goodwin ended one adventure with the March birth of their twins and began a new one.

“We weren’t going to have too many chances to do this at our age, so we decided to go the very best route,” Goodwin, 55, says, explaining why he and Dam, 54, chose Dr. William Schoolcraft. The choice made the already difficult birthing option harder, because the couple had to travel back and forth from their Seattle home to Colorado at least six times. But Dam and Goodwin say couples considering surrogacy should look for the best people to partner with them through what they call a complex process, with financial, legal and emotional issues at stake. 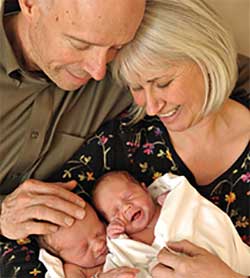 “The first thing people need to decide is if they can afford it,” Dr. Schoolcraft says. Unless they have a friend or family member willing to be their surrogate, they need to go through an agency that finds and pays women to fill the role. “It’s typically a quite expensive option.”

Even with their own carrier, it will cost couples at least $20,000 to $25,000 just for the reproductive specialist fees, says Swedish Medical Center’s Dr. Michael Swanson of Conceptions Reproductive Associates of Colorado, another leading fertility clinic. If you add an agency’s fees, on top of legal and other miscellaneous costs, the price tag inches upward, possibly into the $100,000 range. But Dr. Swanson says, especially during these down economic times, he’s always amazed at how determined these couples are, revealing their dedication to parenthood before their child is even born.

“We were resolved that we wanted to have a family,” Goodwin says. “We would do what it took to get there.” Couples must hire an attorney, who prepares contracts and assures legal issues are followed. Many states, for instance, don’t allow traditional surrogacy, when the surrogate’s own eggs are fertilized. Neither Dr. Schoolcraft nor Dr. Swanson will do traditional surrogacy, largely for ethical and legal reasons.

“It’s psychologically troubling,” Dr. Schoolcraft says. “The baby is biologically hers, so the attachment issues are different.” He has never had a gestational surrogacy – where eggs are fertilized with sperm in a petri dish and the resulting non-related embryos are implanted in the surrogate – turn into a custody battle. Generally (although Goodwin and Dam used donor eggs because of her age) surrogate babies are the biological children of the couple.

Emotional issues, particularly trusting another woman to carry your child, are huge. Extensive background checks and physical examinations for the carrier, and psychological counseling for the carrier and the couple, are required, Dr. Swanson says. And surrogates must have an excellent obstetrical history, including an uncomplicated previous birth, he says.